“Now I see the secret of making the best persons. It is to grow up in the open air and to eat and sleep with the earth.” — Walt Whitman

Using the navigation on your smart phone to find Coyote Trails in Medford, Oregon does not prove to be highly accurate, and thus begins the escape from the modern world into a slice of nature.  Luckily when I called Katie in the Coyote Trails office, she was able to give me directions on how to find the Nature Center and the summer camp dome by Pacific Domes. As I drove past Les Schwab and turned onto a road leading past apartments and a long stretch of soccer fields, I couldn’t help but wonder if I was going the right direction. This is one thing that makes the location of Coyote trails unique: it is a little oasis of nature surrounded by suburban sprawl and situated merely a couple hundred yards from I-5.

The cool of the summer morning was still present as I stepped out of my car and  was greeted by quiet and bird calls. A large solar pavilion stood off to one side, and beyond that the land dipped down into the flood plains of Bear Creek where salmon spawn in the fall. As I strode toward the old ranch house I could see the small groups of children and their camp leaders engaged in different activities. Once inside the building I found Katie, who explained that the ranch house had been converted into offices and a learning center for group activities. 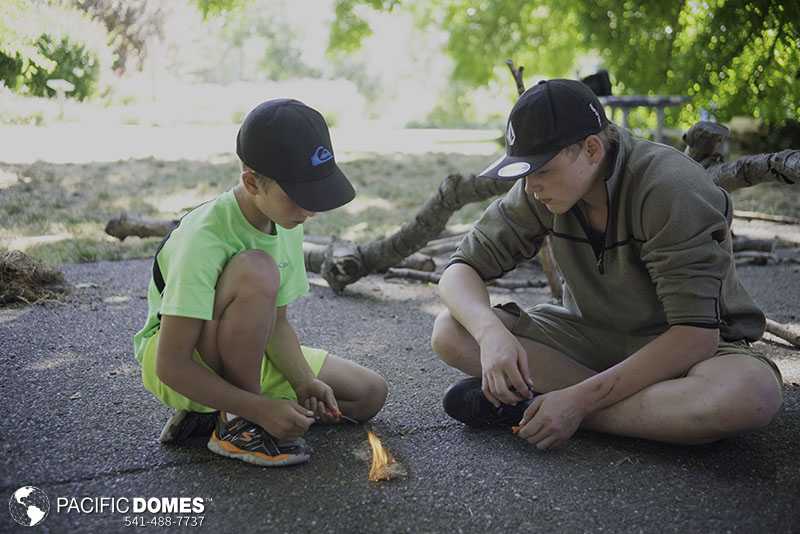 Katie gave me a quick tour inside before we headed out to the 16’ dome located behind the nature center. The cover was dark blue with a map of the world at night printed on it. We unzipped the flap of the large round door and found ourselves in a womb-like space, free of any furnishings and ready to provide shelter for the camp’s needs. Light poured into the dome from the bay window that looked out into the native trees growing beyond the edge of the grass. With the forecast for the day in the mid 80’s, Katie and I removed 4 round window covers, allowing ventilation to flow through the dome.

Heading out into the sunshine, we passed the Pollinator Garden and two massive black walnut trees. The first group of boys and girls I mingled with (age 5-7) were using nets to collect bugs in the tall grass of the native meadow. Down by the Riparian Habitat next to Bear Creek there was a smooth slab of bed rock where the kids were learning about river otters, salmon and other creatures native to the area. I stopped to talk to a group that was starting fires in the shade of the black oaks, using flint and steel and shredded pieces of jute rope. Another group was having snack time in the shade as a camp leader read aloud to them from The Lorax by Dr. Seuss. Near the dome, a group of boys and girls were practicing silence so they could focus on whittling sticks in the shady grass. 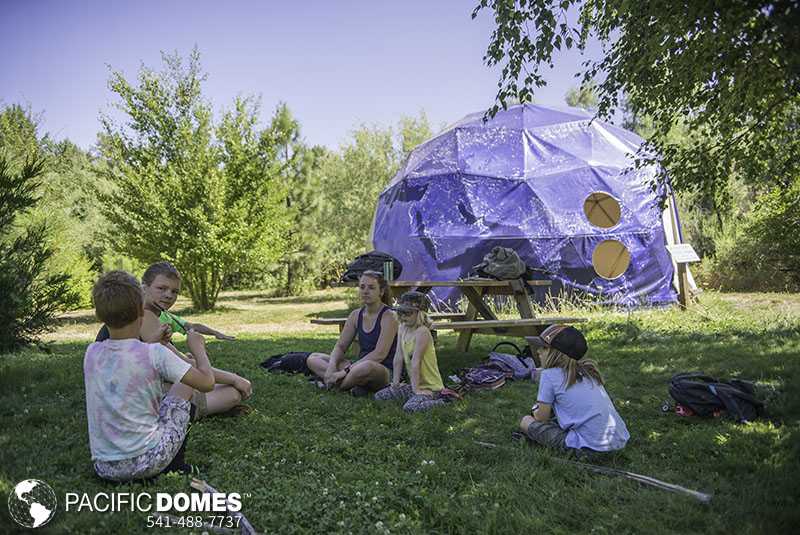 As midday approached a group of kids had fun dodging the spray nozzle of the hose as they darted in and out of the spray zone on the lawn. Shrieks of anticipation and delight rang throughout camp as I said my farewells, left the green oasis and headed back to the Pacific Domes office.