Pacific domes of Oregon teams up with the International Space Pioneer NASA to create Geodesic Living Structures and Dome Shelters for their Exploration to NASA’s Mars Test Mission Hi-Seas. We are pleased to mention that we are the preferred Dome Home and Dome Shelter manufacturer for NASA and have worked on subsequent projects for them.

Nasa clears way for more studies after astronauts emerge from four months in a geodesic dome, supplied by Pacific Domes, on the isolated Mauna Loa. 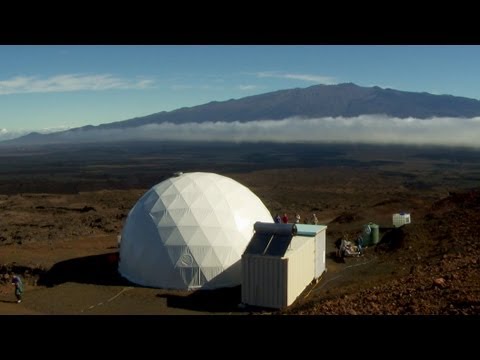 The astronauts wrapped up the Hi-Seas mission on Tuesday, leaving behind the vegetation-free lava fields and the 1,000 square foot geodesic dome that served as their living and working space.

“Geochemically if you compare geology there to the geology, for example, that Curiosity is looking at on Mars – very similar,” said Kim Binsted, a UH professor who is an investigator on the study. “You can look at pictures of Curiosity and pictures of our site – sometimes they are almost indistinguishable – except we’ve got beautiful blue skies.”

This study was meant to compare two food systems – pre-prepared individual items and something like cooking, except with freeze dried meats and produce – to see how items rate in energy use, crew satisfaction and other variables.

Nasa recently gave the study funding for three more years of research and three more analog missions that are set to last four, eight and 12 months.

The focus of these studies will move from food to more sensitive situations. “That’s looking at issues to do with crew cohesion and crew psychology – so how do you select a crew and keep them sane without killing each other over these long duration,” said Binsted. 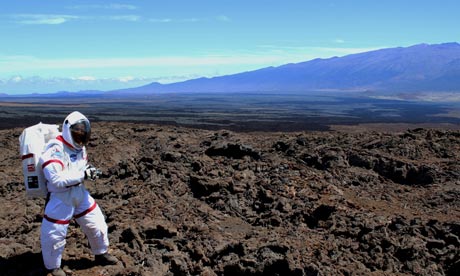 It helps that unlike Mars or Antarctica, where extreme conditions for non-simulated missions have led it become a serendipitous site for analog studies, the Hawaii site is one hour from a hospital and other easily accessed safety resources.

“We can mess with them in ways that we wouldn’t be able to in Antarctica,” said Binsted. “You wouldn’t run a simulated emergency in Antarctica, because there is too much real risk there. Whereas in Hawaii, we can put pressures on them in different ways and know that if something goes badly wrong we can still rescue them.”

This is hardly the first time researchers have simulated a mission to Mars, nor even the only ongoing simulation. Like the Hi-Seas mission, most of these projects try to create analogous circumstances to life on Mars, so that researchers can study the problems of long-term life in space by creating.

The six men – Russian, French, Italian and Chinese – also spent 30 days landed on an artificial Mars, which they accessed through yet another tube attached to the system. On this pretend planet, they had to wear spacesuits and enact emergency scenarios. The results so far show how unhealthy sleep cycles can induce depression, how not everyone is up protracted isolation and confinement, and how a sedentary life under artificial light is bad for astronauts and office workers alike.

On this pretend planet, they had to wear spacesuits and enact emergency scenarios. Photograph: Angelo Vermeulen/Hi-Seas

Meanwhile, the Mars Society runs simulations through its Mars Analogue Research Station Program, shortened, predictably, to “Mars”. The Society currently has two domed “habitats” at work, one in southern Utah and another on the polar desert of Devon Island, Canada, whose terrain and harsh conditions comes as close to Mars on Earth as can be managed. Often adorned with the tricolored flag of Mars“, these habitats is home to about six volunteer scientists, who work under “sim” conditions for up to four months at a time.

Like the men of Mars500, the men and women of the society conduct psychological tests, but they also test survival equipment and robots, hunt for water with geophone flutes, and study the extremophiles that survive in the world’s most inhospitable places. When outside the habitat, they wear full space suits, keeping “in sim” at all times – except when someone needs to look out for polar bears.