The Song Of Plants | Pacific Domes
Skip to content

Imagine strolling beneath a canopy of redwoods and dipping down to meet the nearest perennial leaf and listen to its song. Imagine the healing, perception, and awareness that could come from such an elevated  experience of natural sonic communication.

There is one sonic artist that is making this reality possible. Her name is Mileece. As a renewable energy ambassador and multi-disciplinary artist, this inspiring and exceptionally creative woman has taken on the role of Nature’s medium. Mileece has developed a method of processing bio-electric transmissions emitting from plant leaves through her own software. With this technique, she is able to translate the language of plants to create enchanting musical soundscapes. 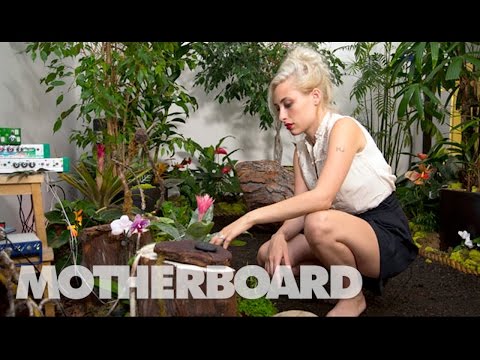 Mileece’s work makes an important contribution to the ongoing dialogue of plant consciousness. This process is not just beautiful and artistic – it’s a fully symbiotic relationship between humans and plants that is strengthened through pure sonic communication.

More recent scientific studies have demonstrated that plants transmit information (sounds) with electrical pulses and a system of voltage-based signaling. This process is eerily similar to the nervous system of animals, which is heralded as the crux of intelligent life.

There’s a whole new dimension of language that can be learned from these transmissions by understanding how plants respond to cues that are directly caused by their environment. These leafy, intricate life-forms are too often dismissed as ‘inanimate’, but in fact, have a profound ability to communicate. It is this communicative potential, that inspires artists like Mileece.

In support of Mileece’s vision, Pacific Domes collaborated with her on a project at Los Angeles’ LILA School named The Sentient Plant BioDome Project. The Pacific Domes team was thrilled to work with Mileece and the Los Feliz school campus to create a biomimicry learning space for young students.

“Within the biodome,” Mileece says, “is a hybrid environment between natural soundscapes and organic electronic music.” Branded as orbs, this all-encompassing endeavor takes shape as a collaborative effort of cutting edge technology partners, artists, public institutions and conservation groups to forge innovative connections between cities and the wild earth. Her ongoing project, “ORBS”, uses domes to foster these connections by creating sensitive harmonic spaces embedded within wilderness environments.

Mileece believes that we, as humans, physiologically resonate on all levels with a healthy wilderness. Mileece’s  most ambitious effort for more than a decade has been oriented towards the creation of network based urban wilderness sanctuaries inside technologically augmented biodomes, powered by electricity generated by her family’s zero-impact waste to energy fuel cell systems.

Mileece’s landscaping and interactive installation designs have  reached over 100-million viewers, featured on prime time television broadcasts and niche channels alike (treewe’vr interactive travelling forest (2013), VICE Motherboard (2014), NY Times advertising of the year campaign (2013)). These works embed her interactive sculptures & instruments, often including specialized, bioacoustic soundscapes that she has recorded in remote wildernesses over the years. Her goal to ‘promote ecology through technology and the arts’ has evolved to include bio-generative interactive light and kinetic scapes, forming fully immersive environments.

Her 3d music compositions for nature-promoting VR have been featured at the Saatchi Gallery & Royal Festival Hall, London among other venues, winning the Tribecca Film Festival’s award in that category 2017 and first place on Forbes’ 2019 review of VR installations.

In an interview with Tom Tom Magazine, Mileece stated the driving purpose of her work: “I try to facilitate connections between people and plants for the sake of people understanding that plants are 100% equivalent to life on earth as we know it – it’s about changing the paradigm of an individualistic society into one of collaboration.”

At Pacific Domes, we are honored to work with exceptional artists and renewable energy ambassadors, like Mileece. We invite you to visit her website and bio to learn more about her process and her inspiring sonic artwork.