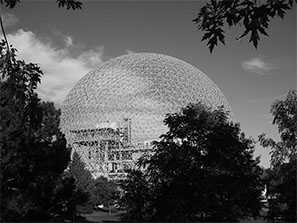 Walther Bauersfeld
The first geodesic dome was designed after World War I by Walther Bauersfeld, chief engineer of the Carl Zeiss optical company, for a planetarium to house his planetarium projector. A first, small dome was patented, constructed by the firm of Dykerhoff and Wydmann on the roof of the Zeiss plant in Jena, Germany. A larger dome, called “The Wonder of Jena”, opened to the public in July 1926. 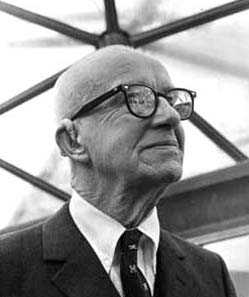 R. Buckminster Fuller
In the 1940’s, inventor, architect, engineer, mathematician and cosmologist, R. Buckminster Fuller set his intention to solve mankind’s housing problem. Through replicating “nature’s own coordinate system” found in all spheres from planets to molecules, and through the understanding that gravitational forces are spherical (not linear), the geodesic dome was born. His designs superseded the structural integrity of any architectural structure yet made. In 1970, the American Institute of Architects awarded “Bucky” a gold metal, acclaiming the geodesic dome as “the strongest, lightest and most efficient means of enclosing space known to man. 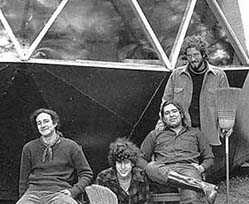 Pacific High School
In 1969 a dome building project began to house 60 students and teachers at an “alternative” high school in the Santa Cruz mountains. Utilizing Bucky’s designs, 17 domes were made, experimenting with as many materials as possible; plywood, aluminum, sheet metal, fiberglass, Ferro-cement, cedar shingles, asphalt shingles, and even nitrogen-inflated vinyl pillows. This project became a focus for the counterculture’s dome building movement of the late ’60s/’70s. 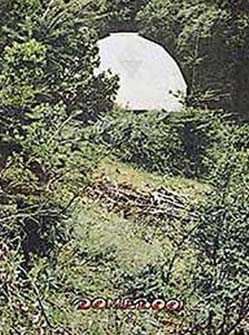 The Domebooks
By 1970 it was obvious that there was enough interest and information to compose a publication about dome building. The Whole Earth Catalog’s production facility was utilized to create Domebook One and later, in 1971, Domebook 2. These books birthed a global movement utilizing Bucky’s dome technology. In 1973, Shelter was compiled. It is a “how to book” on hand built housing, with a chapter called Domebook 3. Some of the people from Pacific High school were also involved in the manifestation of the Domebooks. Click for Dome Book One and Dome Book Two. 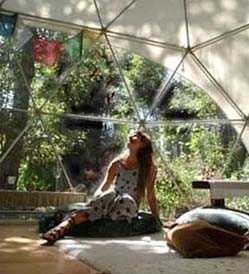 Pacific Domes
In 1979, Madre Grande Monastery in Southern California had a shelter need for its members. Asha Deliverance saw what was needed and set to work on a solution with her sewing machine.”When I made my first geodesic dome, necessity was the mother of invention. I was about to give birth to my second son, and was living under a tree.The first dome I made became my home and the place of birth for Elias DeChristo. I made a dozen domes in all, using steel tubing and sail cloth covers. As the beautiful setting was in the high mountains, I made large windows to enjoy the views and designed wood stove outlets into the dome covers creating an ideal shelter system.

A year later many of us moved to Southern Oregon. As the domes were successful and the back to land movement was still strong, in 1980 a business was born! Over the past years, the need for larger and larger domes has maintained a constant growth. The larger domes have opened up the dome uses to include both shelter and event domes.