Santa Lives in a Dome: “The only structure that survives the extremes of the North Pole” Pacific Domes
Skip to content

Santa Claus is REAL and He Lives in a Dome at the North Pole!

“Of course, Santa lives in a dome! It’s the only structure that can handle the strong winds and heavy snows of the North Pole! ” ― Pacific Domes Inc. 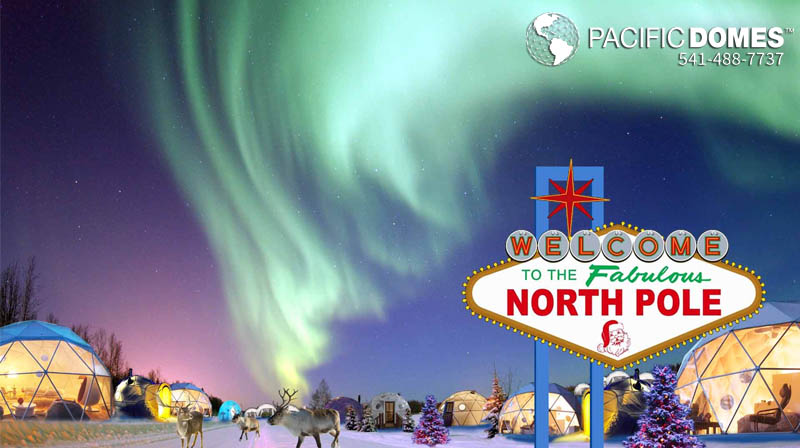 WOW! Santa Claus has been spotted by airline pilots flying low over the North Pole? Yes, Santa, was recently sighted coming out of his igloo dome home with a huge bundle slung over his shoulder, accompanied by elves carrying packages!

Santa Claus, in his red Christmas outfit, was seen walking over to his sleigh and setting his bundle inside, where sleigh-belled reindeer were waiting to fly.  As he got into his long red sleigh, Santa was observed waving goodbye to Mrs. Claus, who stood by the entrance of the snow-covered dome. The plane’s ‘sophisticated’ radio picked up Santa’s famous, “on Donner, on Blitzen”, as Santa sped off, circling once or twice over the top of the igloo dome and disappearing into the distant horizon.

Although sightings of Santa are more common than most people realize, the public isn’t aware that pilots are admonished to keep silent regarding UFO sightings; especially, sightings of Santa at his North Pole location.  Previous Santa sightings, have been labeled as ‘Top Secret’ UFO sightings by most governments of the world; and, The Santa Claus Disclosure Project wanted to know why?  Well, you know how hard it is for us humans to keep secrets for long; so, the news leaked out through undisclosed sources… WikiLeaks, Julian Assange?

Arriving at a nearby location where satellite photos had pin-pointed the entrance to Santa’s North Pole dome base, the team quickly set up their own temporary dome camp with just a few basic tools. 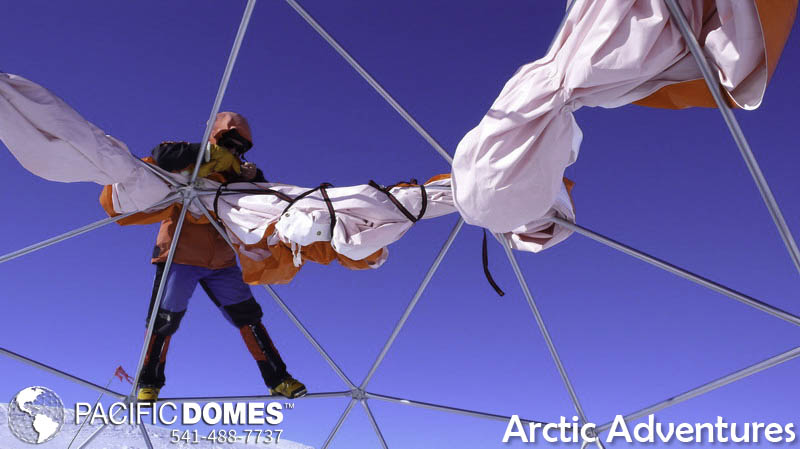 The intruder’s presence was sensed by Santa’s trained reindeer and it wasn’t very long before the news had gone viral in the tiny dome community of elves.  Mr. and Mrs. Santa stepped outside of their warm, cozy dome home to see what all the commotion was about.

Of course, Mr. and Mrs. Claus were expecting the newly arrived visitors to the North Pole (Santa can see what is happening anywhere in the world).  Santa was aware that the peace-loving visitors were of no threat to his unarmed community of elves, so, Santa quickly dispatched his welcome team.

“OMG Santa is REAL! He’s a giant and has a very long white beard!”, exclaimed one of the team members, as the team stepped out of the sled.  Santa welcomed the visitors with his merry HO-HO-HO and invited them into the dome where Mrs. Claus served hot cider and warm gingerbread to the hungry guests.

As they were engaged in merry conversation, Santa suddenly got serious and said, “if humans are ready to give up fighting amongst themselves, I am ready to tell the world my story and why I am here… sadly adding, the ‘giving spirit’ of has been all-but-forgotten.”  Then, because Santa does not stay sad for long, with a twinkle in his eye, he extended an invitation to come back the next day and take a tour of the Christmas Workshop dome community and learn more about what it is like to live in one of the coldest places on earth.

The following day, the team arrived refreshed and eager to tour Santa’s dome village.  Strolling down the avenue with Santa, the guests were amazed at how huge this dome community really was! 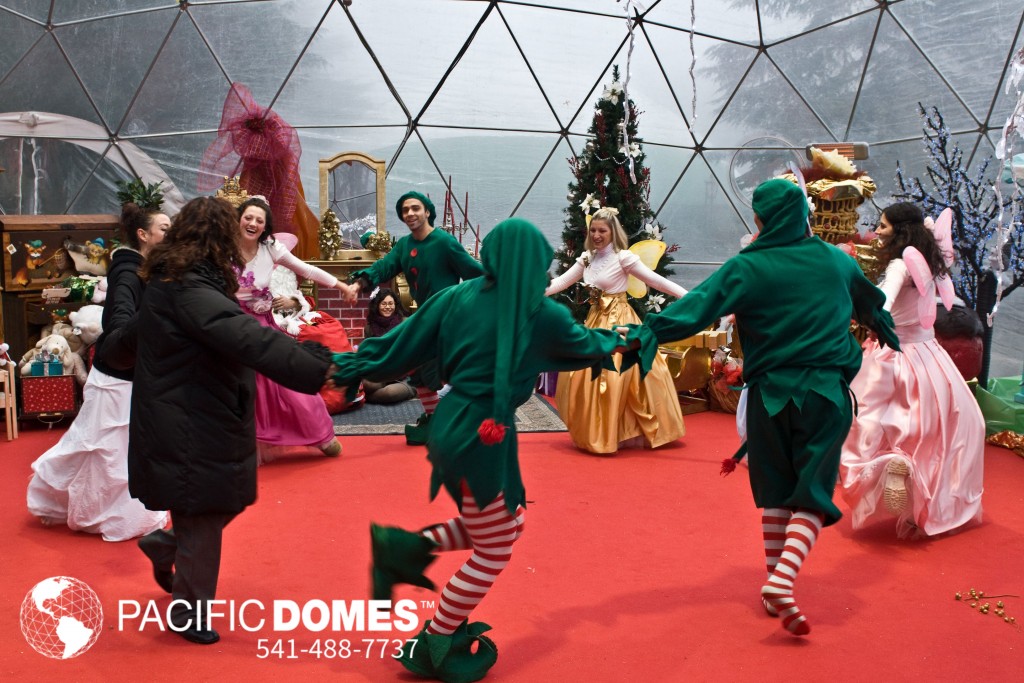 Peeking just barely above glistening snow drifts on both sides of the street were rows of warmly lit tiny snow dome houses where the elves reside when they aren’t busy making toys in Santa’s Workshop!  And, as the guests continued to walk along Dome-Main street, they saw what looked like a huge dome at the far end… yes, indeed, this was the site of Santa’s famous 120ft. dome workshop!

Once inside, Santa’s workshop opened to an enormous underground cavern with steps leading down to an interior workshop where another smaller dome sat right in the center.  Santa said that this dome was very special and was where he could call anyone’s name and they would appear in the dome… from anyplace!

Santa wants the world to know that he is REAL!  Peace-loving people, especially children (because their laughter is so genuine), are welcome to visit the North Pole while in their dreams.  All one needs to do, is to set the intention before going to sleep at night, that they wish to visit Santa in the North Pole and Santa will use his dome to bring them for a visit… from anywhere in the world! 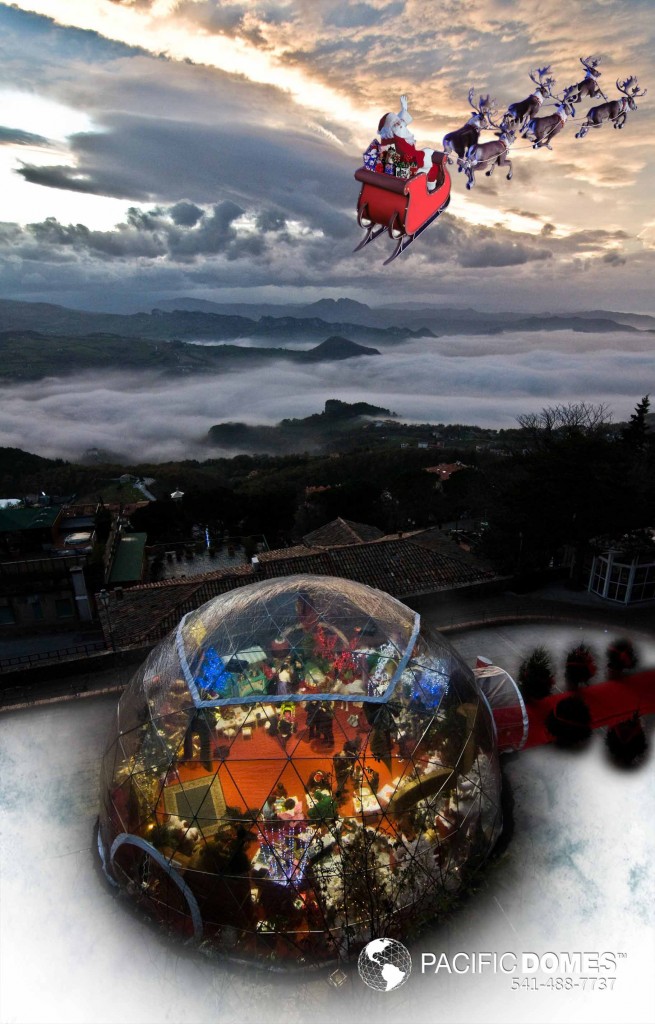 From everyone at Pacific Domes of Oregon, we are wishing you and the ones you love the very happiest of holiday seasons!