Samantha and Cheetah established TurkeyTail Farm on 40 acres of Oak Savanna in the California foothills of Yankee Hill in 2008. Their mission was to raise grass-fed organic meat, cut flowers, and oyster mushrooms, which they did successfully until the Camp Fire tore through the farm last November. This is a story of true survivors that are so determined to continue doing what they love, that they will work through any and all  barriers and red tape to make that happen.

The name TurkeyTail  came from the Turkey Tail mushroom, which is the first mushroom Samantha and Cheetah ever cultured from the wild. They set to work building a farm from scratch beginning with a water infrastructure, fences, greenhouses and their modest home and shop. At this point the 16′ dome that had served as a temporary home when they first moved to the property was being used to store tools as well as chicken harvesting. In his college days, Cheetah had lived in the dome for two years before it moved with him to Yankee Hill, where Turkey Tail farm is today.  Money was short so they built everything themselves, taking odd jobs as needed, salvaging materials and even milling their own lumber. Before long they had a functional farm. They launched a Community Supported Agriculture (CSA) program that provides farm fresh lamb, pork, chicken, duck eggs, oyster mushrooms, herbs and cut flowers. 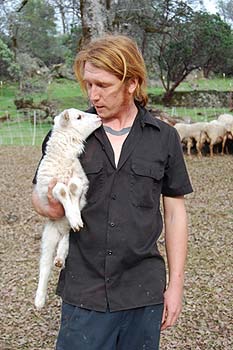 The CSA model is similar to a farm-subscription. For a fixed weekly price members receive a selection of products directly from the farmers . Members know the source of their food as well as becoming shareholders in the farm.  Farmers can keep their overhead low while having the pleasure of getting to know the families they are feeding.

At the heart of the TurkeyTail Farm model is the synergistic appraoch to the various components of the farm. The ultimate goal is sustainability and to that end mobile electric fences are used to move animals around the property to prevent overgrazing.

The roaming ducks and chickens fertilize the pasture and improve the quality of the graze for the sheep. The sheep mow the pastures so the smaller baby chickens can get around easier. The byproducts from the mushroom farming operation can be used as feed and nutrient supplements for the pigs and chickens. The pigs are primarily fed with food scraps from nearby Chico, California restaurants. In turn the restaurants serve TurkeyTail mushrooms in their cooking. The manure from the farm is composted and used as fertilizer for the flowers and herbs. The concept is to move energy and nutrients around the farm, never using anything just once.

Samantha and Cheetah grow their oyster mushrooms in low tech, water-efficient greenhouses, and despite the absence of artificial cooling are able to produce mushrooms year-round; straight through the intense Nor-Cal summers. The chefs in their community LOVE their mushrooms because they have unparalleled freshness and quality compared to commercial produce. Soon the TurkeyTail name was on the menu at several local artisan restaurants.

Surprisingly, this is not the first time Samantha and Cheetah have been through a forest fire. They maintained there property by clearing brush and constantly being vigilant about their fire preparedness. The Camp Fire however, was unprecedented. It spread at the rate of at a football field per second. When the fire storm settled to a dull roar, 153,000 acres burned, 52,000 people were displaced, over 18,804 structures were destroyed, 1,500 pets were found, and 86 people confirmed dead. It has been dubbed the most destructive and deadly wildfire in California history.


The moment Samantha and Cheetah saw the plume of smoke on the ridge they  loaded all the animals and tools they could and evacuated to the safe-zone. Information was spotty but when a fire-fighter friend got into their farm it was confirmed that their home, barn and water storage were gone (over 10,000 gallons of storage and their pump). Contained within their home/shop and barn, was all of their mushroom cultivation and veterinary equipment, as well as all of their tools, antiques and hand made art. They had most recently re-skinned their mushroom grow houses and they were all melted and tattered as well.

They gained access to their land with a special permit for farmers, and drove straight back into the burn zone to care for the animals that miraculously survived the fires-the ones they were unable to load out during the first hours of the fire. Their electric fences had all melted, some of the pigpens were incinerated, trees had smashed their home and sheep pen, but the animals were alive. With their trusty sheepdog Haro they set about herding pigs and sheep into makeshift pens, and began trailering in water to sustain them.

Days after the fire Samantha and Cheetah returned to what was left of their farm and began the lengthy process of restoring TurkeyTail Farm. Meanwhile, they have purchased a trailer to live temporarily while they work tirelessly. Without access  to utilities they must run everything on generators and water must be trucked in. Nothing remains of their previous infrastructure, but the animals still need to be tended to, hazards must be removed and pipes and wires must be repaired. The only salvagable items from the fire were two wood stoves and some metal tools.  PG&E will not re-establish power until the county inspects the property and deems it safe. The county will not inspect their property until all hazardous material are cleaned up. The county has stated that they will not provide clean-up for another nine months up to two years.

Farming can be challenging but Samantha and Cheetah love their land and what they do. This is the hardest thing they’ve ever done, but they are determined to stay and contribute to the community that has shown them such amazing support. They have been fortunate enough to save much of their product and have been giving 10% of sales to a fire affected family in the community in the form of cash and food. This fire has irreparably changed their lives and business model forever, which has revealed their character by bringing out their determination to continue farming.

They hope to snowball their misfortune into something meaningful. Going forward, one of their goals is to launch a program utilizing mushrooms to clean up toxic contamination to help the local residents after the fire. This is a growing field called Mycoremediation in which mushrooms are used to break down carcinogenic hydrocarbons and to pull heavy metals from the soil. Their plan is to receive a grant that provides no cost site clean-up for homeowners.

If you feel moved by this story and would like to help Samantha and Cheetah rebuild their farm, please  contribute to their Crowdfunding.