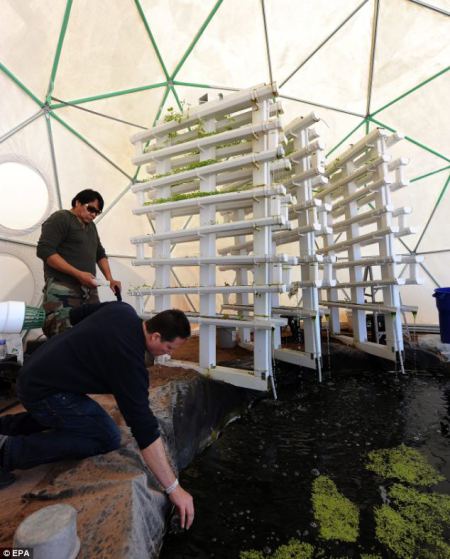 Pacific Domes of Oregon, builders of the worlds best Geodesic Domes for use as Industrial Grow Dome or as Backyard Greenhouse Domes.

Pacific Domes recently supplied the Navajo Nation with a state of the art Bio-Dome, which will aid them as they tackle complex community health problems. Located in one of the most isolated regions of the United States, the Navajo Nation is widely considered to be a “food desert,” meaning that a huge part of the population lacks access to fresh, healthy food. Navajo leaders built the dome largely to move residents away from junk food  towards a diverse diet that has much more in common with the ancestral Navajo diet.

The dome maintains an “eternal springtime” environment in which food can be grown year-round. Fish, algae, and vegetables maintain a mutually beneficial relationship within this closed system, which is capable of producing over 10 pounds of vegetables per day and 150 pound of fish per year. The only emissions of the dome are carbon dioxide, water vapor, and methane, which can either be cycled back into the system or used as an energy source. Last time we checked the dome was flourishing, creating a rich oasis in a barren desert.