All around the world, coastal residents and island dwellers are at risk of losing their lands due to rising waters, a well-known consequence of climate change. Concerned scientists measuring global warming have determined that human activity is largely responsible for planetary climate change.

“Climate change is expected to lead to increased human mobility in the forms of migration, displacement and planned relocation of communities as areas become uninhabitable because of the effects of global warming.” ―The Brookings Institute 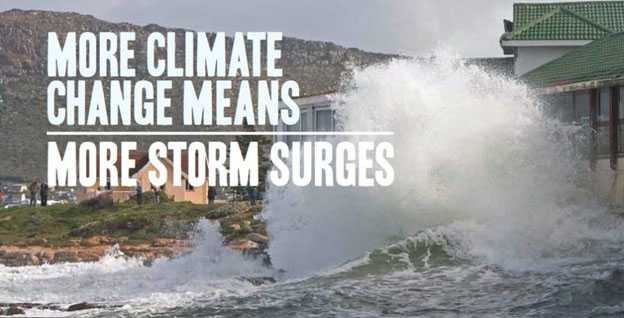 As low-lying coastal cities and islands continue to erode and disappear, displaced human populations will have to continually adapt to the changing landscape by either moving inland or relocating to larger islands, leaving ancestral lands behind.

The Island Mass Effect
As per NOAA’S Office of Ocean Exploration and Research, the ocean is the lifeblood of Earth, covering more than 70% of the planet’s surface, driving weather, regulating temperature and ultimately supporting all life on Earth. Islands are the precious habitats that enrich the geological, biological and ecological features of our planet.

The “Island Mass Effect” theory proposes that the physical presence of islands causes circulation patterns that carry nutrients to surrounding waters. A healthy biological growth ecosystem develops through an increase in nutrients, which allows for the proliferation of phytoplankton. In turn, the phytoplankton entice fish, which then becomes food for birds. This excrement fertilizes the water, thus increasing phytoplankton numbers in a self-perpetuating cycle.

It’s a Win-Win!
“A society is defined not only by what it creates, but by what it refuses to destroy.” ―John C. Sawhill

The tipping point for beneficial restoration of the delicate marine life ecology on Earth lies in the creation of sustainable floating islands designed to mitigate the displacement of people’s cultural lands and communities, fast disappearing beneath ocean waters. Let’s create a vision of a just and prosperous society with no one left behind. People win, the environment wins, and life on planet Earth prospers once again! “In the early 1960’s, I was commissioned by a Japanese patron to design one of my tetrahedral floating cities for Tokyo Bay. Three-quarters of our planet Earth is covered by water, which they desalinate and recirculate in many useful and non-polluting ways. Floating cities are designed with the most buoyantly stable conformation of deep-sea bell-buoys. Their omni-surface-terraced, slope-faced, tetrahedral structuring is employed to avoid the lethal threat of precipitous falls by humans from vertically sheer high-rising buildings.” ― Buckminster Fuller
Introduction to Seasteading (:54 seconds)

In a series of Seasteading videos, co-author of the Seasteading book, Joe Quirk, examines real-life examples of forward-thinking Seasteading entrepreneurs, who are committed to solving humanity’s biggest challenges thru sustainable innovations aimed at restoring marine ecosystems. When we listen to the sea, we know what our moral imperatives are: 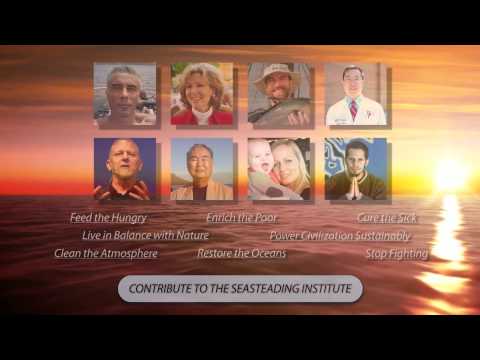 What is Seasteading? (6:41 min)
In Seasteading 101, Marc Collins, co-founder of Blue Frontiers and ambassador for the Seasteading Institute, explains the feats of engineering that are making the Seasteading vision a reality. The Core Concept behind Seasteading is that a planned floating city in international waters will attract entrepreneurs and change-agents from all walks of life, who will then lend their talents towards building other sustainable marine ecosystem restoration societies on the sea.

The Seasteading Movement −  Solutions to Sea Level Rise  (1:36 min)
Are you ready to learn more about how you can participate in the Seasteading Blue Frontiers movement to build the next floating frontier? It appears that after more than a decade of R&D that followed the unveiling of the Seasteading vision, the first floating islands will soon begin construction. The pilot project will begin construction in French Polynesia, with many more floating islands to follow suit in other parts of the world. 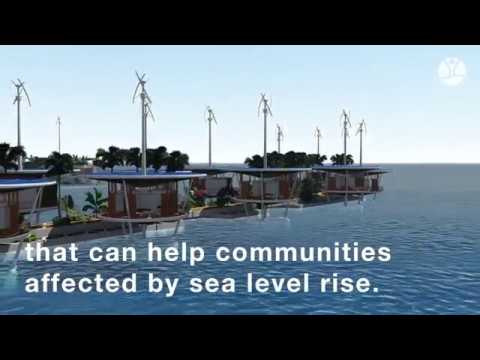 Futuristic Floating Dome City
Pacific Domes International has been pioneering the future of geodesic domes since 1980. Learn why floating domes are paving the way towards marine ecosystem restoration and a more sustainable future on land, at sea and in the future of space exploration.