Domes are the strongest structure known to man.

Both Shaun Hausman and Curran Boyle are architects from LA, independently they chose to live in tiny house domes in the California countryside with their families.

More than a decade has passed since Home and Garden Magazine published a beautiful piece on Shaun Hausman’s dome in Ojai, California.  Fast-tracking to the present, Hausmann’s dome home still stands as a futuristic architectural landmark that continues to inspire a sustainable vision for living in harmony with our natural environment. 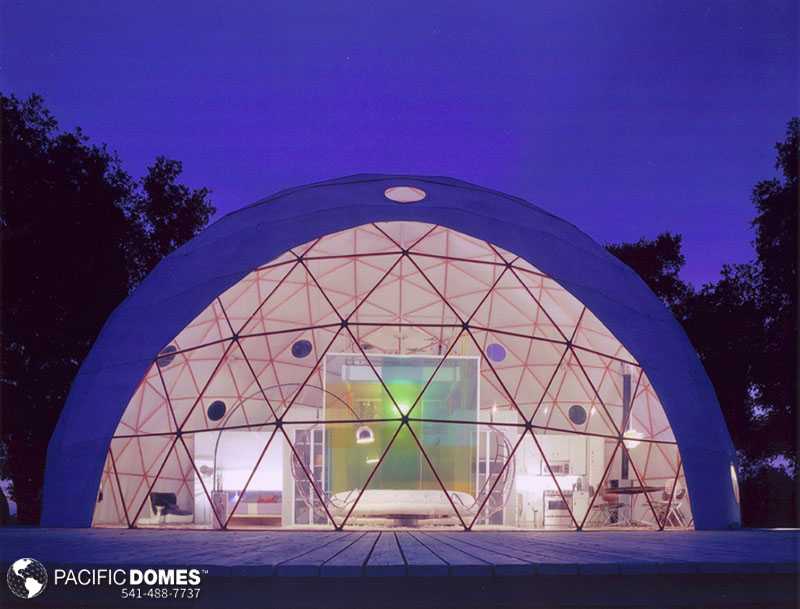 A conventional house was never an option for Shaun Hausman, a nationally recognized interior designer. Though he originally envisioned treehouses and yurts for his plot of land, Hausmann ultimately realized that an co-living dome manufactured by Pacific Domes best met his aesthetic and budgetary qualifications. Hausman is a nationally recognized interior designer, and his use of space inside the dome is truly elegant and remarkable. Read the full text below:

From Home and Garden Magazine:

When interior and production designer Shawn Hausman first entertained the thought of building a home in Upper Ojai, just north of Los Angeles, he envisioned a tree house – something like the archetypal clubhouse in the sky, yet capable of sheltering a family in relative comfort year-round. 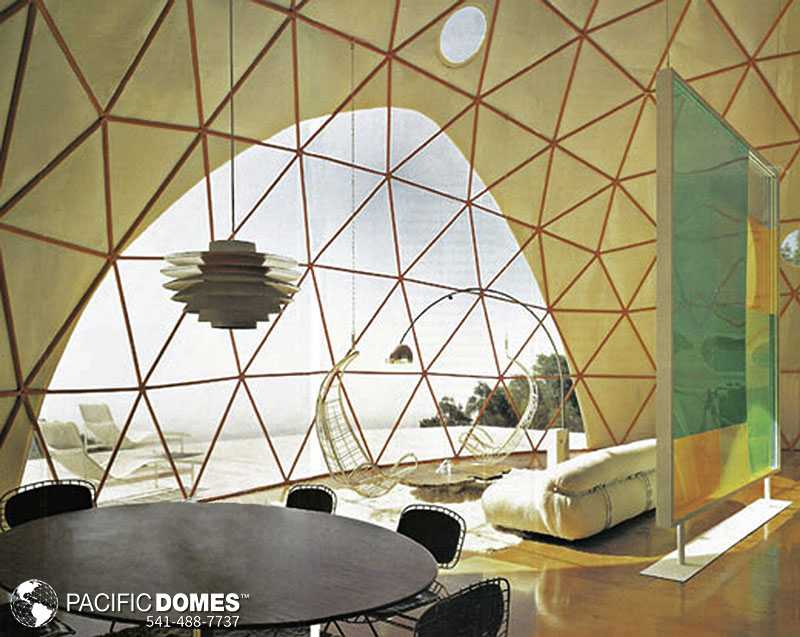 “It was a romantic idea, but ultimately impractical,” he admits. “We wanted to find a solution that was inexpensive but genuinely interesting, a house that would have very little impact on the environment. We were also looking for something that could be disassembled and transported to another location if we ever decided to move.”

The tree house fantasy wasn’t a total failure.
“When we met, Shawn completely seduced me with this idea of living in a tree,” recalls Jessica Kimberly, Hausman’s design associate and partner in life. “We both committed to exploring wild, alternative options.”

Their search ultimately led them to the idea of a prefabricated dome. They gathered information from the Buckminster Fuller Institute as well as from the Internet, where they found dozens of companies that specialize in domes. The news wasn’t all good.

“We liked the concept of the dome, but not the finished product,” Hausman says. “Most of the ones we saw were wood-framed, not inexpensive, and not easily transportable. A lot of them sacrificed the curving quality you expect in a dome, because of the rigid geometry of the typical triangular modules.” 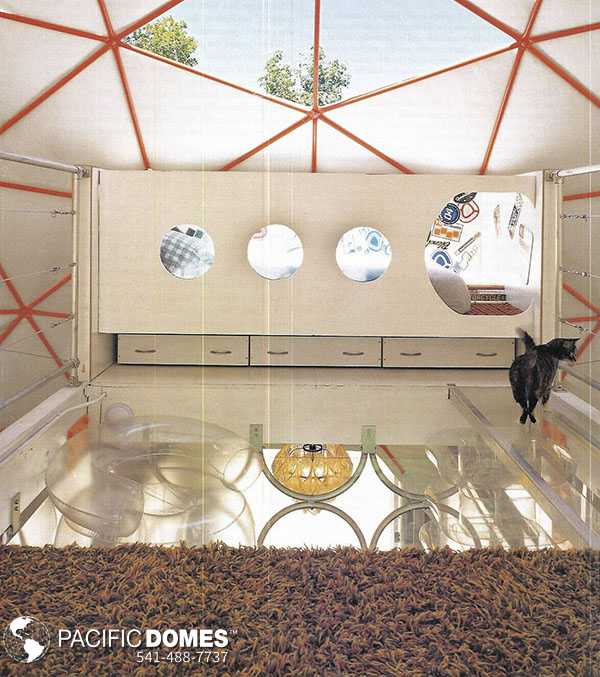 Yurts were next on the agenda. Fortuitously, during a yurt reconnaissance mission at the Ojai Foundation, the couple stumbled upon a dome that appeared to meet their specific aesthetic and budgetary criteria. The designers worked with Pacific Domes, the manufacturer, to pull off the ambitious project.

Hausman’s 11-year-old son, August, inquisitive and remarkably design-savvy, contributed his own ideas. “This was an extraordinary creative outlet for all three of us,” Hausman insists. 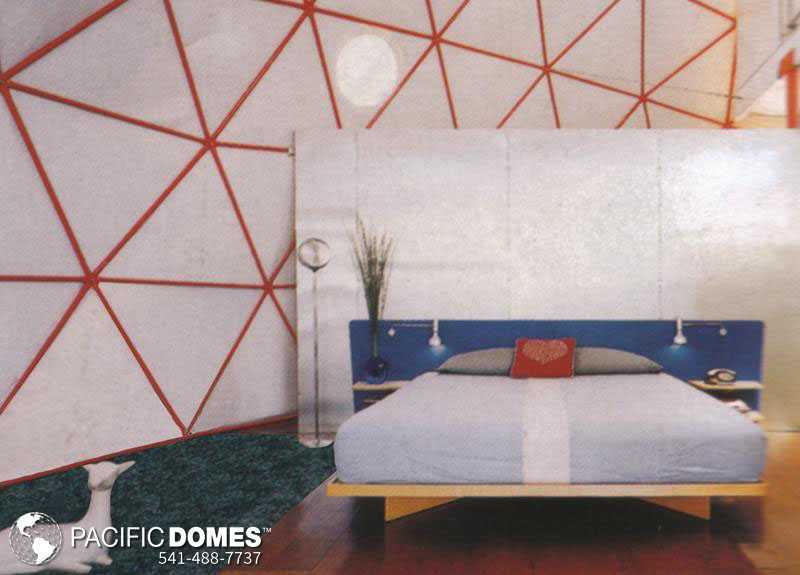 The dome itself, 44 feet in diameter and 22 feet high, perches on a simple wood deck supported by concrete footings. The frame-one-diameter conduit, powder-coated in vibrant orange – has a canvas skin treated with rubberized paint that provides a degree of insulation as well as protection from UV rays.

For ventilation, parts of the skin can be peeled back, and each of the 15 vinyl portholes can be replaced with round screens. The designers deployed furnishings – a mix of funky vintage pieces and custom elements – in an open plan that preserves the fluidity of space, light and views within the dome.

The modesty of the structure defers to the majesty of its undeveloped mountaintop site, which offers sweeping views that extend to the ocean and the Topa Topa Mountains. 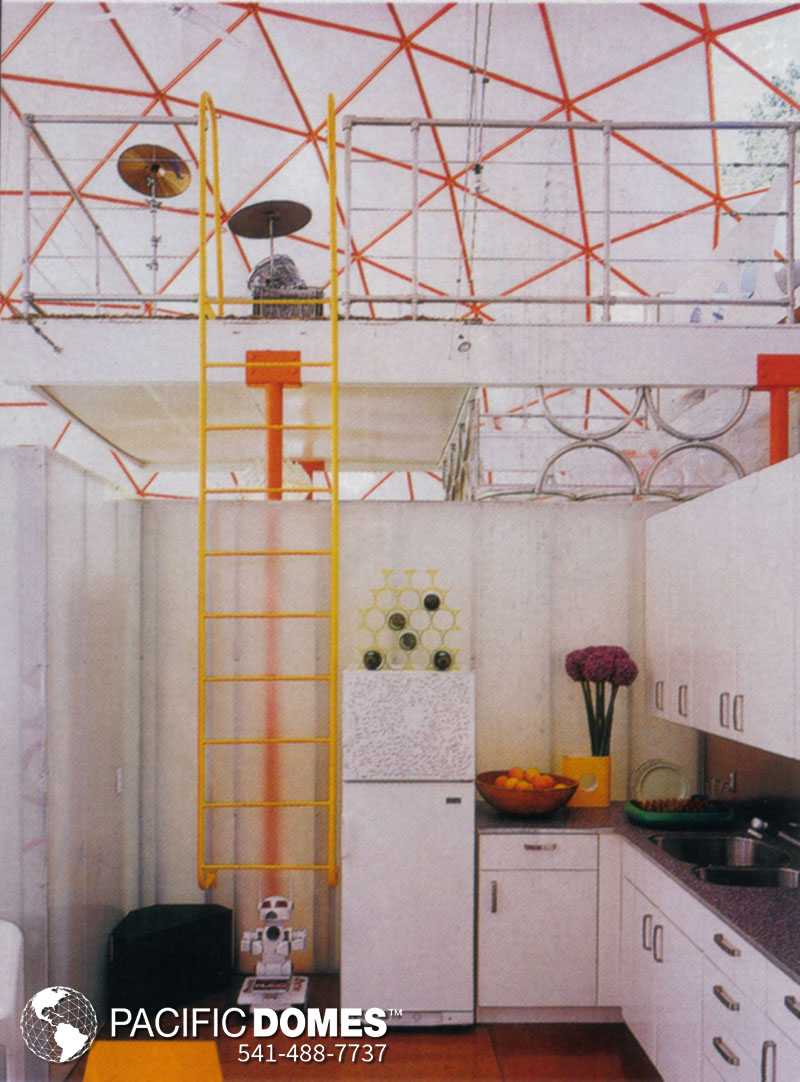 There are no paved roads, no Starbucks and no neighbors, save for coyotes, deer, rattlesnakes, owls, hawks and the occasional mountain lion. The remote location presented serious challenges to comfortable habitation: access to running water, electricity, fuel and telephone lines simply didn’t exist.

The central screen of multicolored acrylic panels, Hausman’s modern interpretation of a stained-glass window, encourages the spread of daylight, while subtly dividing the space. The coffee table is fashioned from black walnut burl. The Tobia Scarpa sofa is from Carla, L.A. 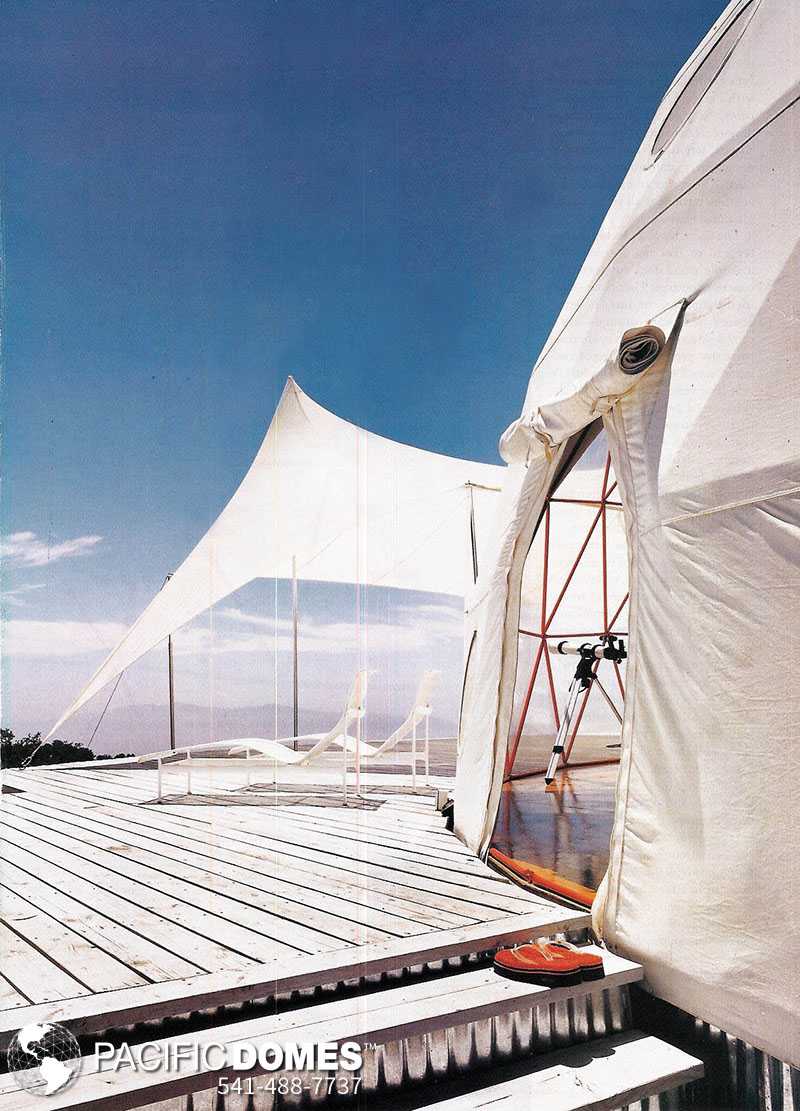 The project took the better part of two years, and plenty of trial and error, to resolve these issues in a manner consistent with the family’s environmental concerns. Solar panels supply nearly all the electricity. Water flows from a tank hoisted onto the property. Propane fuels the stove and refrigerator. As for the telephone line, Hausman purchased a spool of industrial-grade cable and ran it up the mountain himself.

“I love the isolation – it feels really wild and free up here,” says August Hausman of the completed dome. “Basically, it’s really cool.”

In this interview we speak with Curran Boyle, Experiential Designer, dome dweller, husband and father. Part visionary, part strategist, Boyle spends his days thinking about ways to improve modern public spaces. He is passionate about conveying how emerging technologies are relevant to people’s environment/experience.

PD: Hello Curran, thank you for speaking with me today!

PD: How long have you lived in your dome?

Curran: Four years. We lived in conventional housing for ten years after school in LA while I worked in architectural offices. But I was interested in sustainable off grid living and began looking for a piece of land to buy. We bought 10 acres, 40 miles Southeast of Chico, CA. Being in the design world, I came across geodesic domes and realized that I would love to live in one while I payed off my school loans and saved to build a house for my family. One summer in 2006, at Burningman Festival where I met my wife, I was impressed with a dome I saw and how it held up in the extreme conditions. I started shopping for one, and I met someone on craigslist with a dome that I bought. It ended up being a Pacific Domes dome, and it was owned for 10 years before me.

PD: What was it about the domes you saw at Burningman that drew you to them?

Curran: So the amount of raw material vs. the available space was notable. Not to mention being able to transport the structure to a remote location… but mostly the way the structure weathers the storms; that part was incredible. One would have to experience the storms out there to understand, but I am convinced that the geodesic dome is the ultimate structure.

PD: What would you like people to know about dome life?

Curran: It is an alternative lifestyle, like living on a boat. But for us, it had its advantages. I would not recommend it for everyone, but for those looking for something outside the box, dome life is the perfect match. 😉

PD: What about permitting?

Curran: I contacted Pacific Domes and they sent me what the county would use for wind and snow loads. The dome is considered to be a temporary structure; I have it on concrete peers which means it is now a moveable structure. When you build a foundation or pour concrete, you need permits, which are expensive. This is a temporary structure until we build our permanent home. This helps us to not pay high rent and to save up and not be in a lot of debt. Our mortgage is $400/month. We pay off student loans with the savings.

PD: How long did it take to turn the dome into your home?

Curran: As soon as the kitchen was built, we moved in. However, we spent 3 years finishing up the materials and details: weatherproofing the skin, tile in the kitchen, building a loft. Currently we are adding a 16’ dome connected via a tunnel for a bedroom/bathroom.

PD: How do you power your dome?

Curran: We are off grid; we have a solar system and an inverter which powers the well, refrigerator and lights. The batteries last 7 years. The dryer runs off propane. The propane bill was $200 between February through March.

PD: How do you heat and cool your dome?

Curran: Fans, wood stove and propane wall heater. The ceiling fan changed everything, and really moves all the air around the room to create consistent temperatures. I painted the outside with Thermo-Shield every year. The paint seals up everything. I even painted the inside of the dome. This stopped moisture build up.

In winter, the wood stove helps dry out the dome. The liner changed everything. When I got it, the liner was super thin, so I was skeptical, and it was challenging to install. Heating became 100 times better after the winter liner was installed, and I had to build smaller fires because the dome heated so much better. When the fire goes out at 4 am, the propane heater would kick in and heat the dome until we got up again to build the fire. With the liner, there is no condensation on the dome anymore. The liner made it more of a home. I want to add a swamp cooler and get cool air through the kitchen. It is 90-100 degrees on our property mid summer.

We burn 4 or 5 cords of wood in a year. I filled propane 7 months ago and I have not refilled it since. The liner holds the 55-60 degree temperature. When the sun shines through the bay window, we get passive solar heat in winter.  A sun umbrella provides shade in May, the time of year when it heats up too much at the angle the sun comes in. The solar fan in the window pulls moisture out and pulls out hot air build up at the top, and the ceiling fan moves the air around. Air circulation cuts down on mildew and mold. It keeps the air crisp. In summer, I choose which windows to open. I also use shade to block some windows to prevent sun from coming in.

PD: What is your favorite thing about living in your dome?

Curran: Its shape; you don’t feel like you are trapped in a room when you are moving from space to space. Stuff doesn’t get piled up in the corners. My daughter likes to run around and around through the kitchen to the living room.

PD: What challenges have you faced in converting to living in a dome as your home?

Curran: Before we got the liner, we faced challenges heating and cooling. We love the liner! We also get gail force winds, and had a tin shed rip out concrete anchors and blow away into a tree. But the dome totally held up. The dome holds up in all sorts of weather.

PD: What inspired you for your interior decorating?

Curran: Our loft in downtown LA was really modern, a penthouse with glass and steel. We juxtapositioned the really modern with boho chic interior. It was a rebirth of older materials and textures.

PD: What is it like raising a baby in a dome?

Curran: I prefer it; she runs around to the spaces over and over again. I would recommend a slightly larger 30 ft. dome for a family of three, but we love our space and talk about adding more rooms as we need them. We are currently finishing up installing a 16′ dome connected to the 24′ dome to use as our master bedroom. It is  a work in progress.

PD: How old is your daughter now? Has she ever lived in anything other than a dome?

Curran: Building and living in our dome is one of the greatest joys of my life. I love the freedom to build and design the structure as I need to. The energy is always fresh and a joy to be in. It’s definitely an alternative lifestyle, but with so much going on in the world, it feels appropriate to be exploring other living options.

[/caption]
Connect with a Representative
Subscribe to News Updates