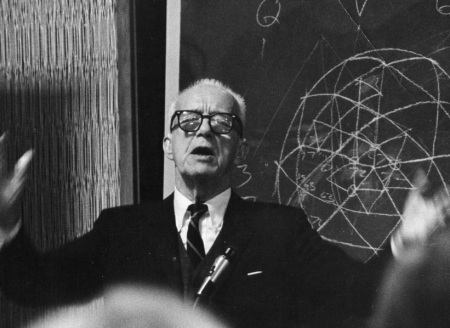 As “Spaceship Earth” spirals into a future of radiant possibility, we find ourselves merging with the dreams; ideals and principles inspired by the great master thinkers of humanity.

R. Buckminster Fuller; inventor, architect, engineer, mathematician, poet and cosmologist was one of the most enlightened mystics of the last century. His universal vision saw our planet as “Spaceship Earth”. He secretly took the responsibility of being a “ships captain” and with passionate intent made his goal helping to care for everyone onboard. Bucky committed his entire productivity to the whole planet Earth and its resources; undertaking to protect and advance all life. He found greater effectiveness in his work when doing so entirely for others. The larger
number for who he worked, the more positively effective he became.

Thinking for him self was Bucky’s commitment. “Faith is much better than belief. Belief is when someone else does the thinking. Everyone is born genius. We must dare to use our minds, dare to know about the truth, dare to be truthful with our selves and dare to speak the truth.” Through understanding universal principles, he was able to discover greater ways to affect the world. His “bodhisattva” attitude opened deep insight and creative invention.

“Do more with less” was his term for sustainability and his lifelong goal. To develop what he called “Comprehensive Anticipatory Design Science”, to anticipate and solve humanity’s needs through the highest technology by providing “more and more life support for all humanity, with less and less resources.”

“The Eternally Regenerating Universe” inspired his confidence that solutions could be accomplished ʺto make the world work for 100% of humanity in the shortest possible time through spontaneous cooperation without ecological offense or the disadvantage of anoneʺ. He believed that we are on the brink of a new world and that everyone aboard Spaceship Earth can live successfully and with hih standards.

He sought to comprehend the principles of nature and to extrapolate its fundamental geometry. Fuller was part of a line of great mathematicians, one of which is credited as the father of science and philosophy, Pythagoras. The Pythagorean schools and their knowledge of the “music of the spheres” are the foundation of inspiration for all of the famous mathematicians that followed from Plato to Kepler to R. Buckminster Fuller. All of them had a profound sense that the geometry found in nature originates from sound waves and is fundament to creation.

The ultimate geometry of creation is the sphere. From the recently discovered subatomic Nano particles (named “Bucky Balls”) to atoms, molecules, the earth, the sun and the stars, all spheres generate from a point of singularity at their center, where all waves cancel out in stillness, the “opening” to the cosmic life force. This point of singularity in the human body is found in the center of the heart, considered the “true mind” by the ancient Egyptians and Orientals.

Scientists have measured frequencies emanating 8 ft. out from this point. This is the Bindu point of oneness experienced in ancient meditation practices. Bucky said “Our brain deals with the temporal. Our mind deals with the eternal. Ninety‐nine percent of who you are is invisible and untouchable”.

The geodesic dome is one of R. Buckminster Fuller’s most utilized inventions. With the goal of creating a structure that would cover the largest area with the least amount of material, Bucky applied the calculations of Kepler, which ascertain that the planets are held in orbit by tensional forces. Just as Pythagoras delineated that the “music of the spheres” resonate from singularity in the phi ratio scale, Plato accurately mapped out the orbits of the planets using the resonant geometry of the platonic solids and Kepler discoveredthe planets are held by an invisible
resonant unified field generated from singularity as well.

“Tensegrity” (tensional integrity) was a word Bucky created describing these forces. Understanding the dynamics of tensegrity, the structure of nature, and the geometry of the sphere, Bucky created the geodesic dome, the lightest, strongest structure ever devised.

“Synergetic geometry” was Bucky’s term for the mathematics of the dome. Synergy is the interaction of two or more forces with their combined effect being greater than the sum of their individual effcts. The dome creates a synergetic resonance field with all life around it, as it replicates the structure of nature.

The vector equilibrium and the understanding of its principles, was Bucky’s great contribution to quantum physics. Vector equilibrium describes the symmetric movement oscillating between the singularity of each sphere, the most efficient lines of movement for energy exchange, the path of least resistance. These forces are always in exact balance. The most obvious vector equilibrium is the tetrahedron, demonstrating equal vectors creating a stable system. Bucky applied these principles to create the geodesic dome. Later it was found that the same mathematical calculations are present in biological life form. Although the dome is a hemisphere, the mathematics, generate a singularity at its center, as does the pyramid. 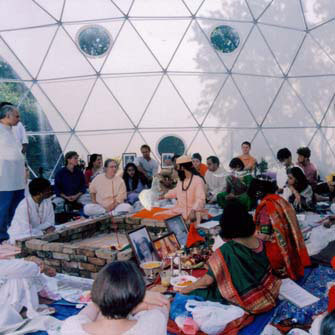 Pyramid means fire in the middle. The dome is a multidimensional pyramid, the “fire” being the infinite source of energy originating from Singularity, the Zero Point in the center of matter. As the pyramid re‐organizes matter, also does the dome. Many healers believe that the dome will heal or “return to order” the molecules in the body. Scientific research shows that DNA is activated by geometric patterns.

Throughout the ages magicians, and other advanced physicists, have used
Geometry to alter human consciousness. Meditation and thought are exalted inside of the dome. When passing through the en‐trance of the dome you will find an alter in the center.

Metaphysicians believe that we are entering into a new level of existence where all beings will operate from their heart or “true mind”. As we join
“Bodhisatva”, R. Buckminster Fuller, and the many other free thinking
humanitarians of our time, we will ignite the consciousness and technology necessary to launch Spaceship Earth into a new world, where all life will exist with high standards and universal principles.