All Female Crew on Mars | Pacific Domes
Skip to content

On January 4, 2020 on the remote slopes of Mauna Loa, Hawaii, the largest volcano in the world, seven female scientists embarked on a historic “mission to Mars.” They will live in our 36′ (11M) Pacific Dome for one year.

Analog astronaut missions place scientists and explorers in remote locations on Earth that physically resemble cosmic destinations like the moon and Mars. There, the researchers explore and perform research as if they were in space. This both generates important scientific data and informs space agencies about what it might be like to step foot on those far-off surfaces.

One such crew of analog astronauts set off this weekend on Sensoria I, the inaugural outing in the Sensoria project. This series of missions will take place at HI-SEAS (the Hawaii Space Exploration Analog and Simulation), an analog Mars habitat for human researchers. Sensoria I will last from Jan. 4 to Jan. 18, when the crew will emerge from the “Martian” habitat. The Sensoria program is unique for a number of reasons, but one that stands is that this is the first HI-SEAS crew to consist of all women.

“This is the first all-female crew to be at the HI-SEAS habitat,” Erin Bonilla, the vice commander and medical officer for this mission, told Space.com. She added that intentionally supporting women is a major part of the vision of the Sensoria missions, which aim to put “women at the forefront of space exploration, which has historically not been the case.

“It’s kind of become this sisterhood that supports one another in the space sector professionally as well as personally,” J.J. Hastings, a bioengineer and the commander of this inaugural Sensoria mission, told Space.com

This is only the first Sensoria mission and, while the crews will not all consist solely of women, women will always be the majority and the crews will be put together with a concerted effort for diversity and inclusion. 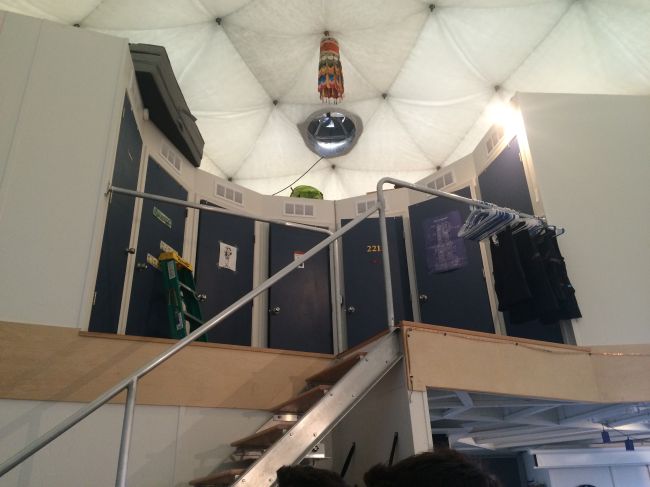 Going forward, “All of our missions will be female-led and female-majority. We, of course, will welcome with open arms our male colleagues, but we believe that women need to be placed at the center of our shared vision for space exploration, that women need to be given a platform for professional development, opportunities for research and training,” Hastings said.A unique “Mars” mission

The all-female crew is not the only thing that separates Sensoria from the pack. This is the first analog astronaut mission to be backed by venture capital, Hastings said.

Hastings also serves as the CEO of Analogs LLC, a company that is backing the mission and the entire Sensoria space program. The program and collaboration provide “access to the analog environment for commercial partners, for government partners as well as our academic collaborators,” Hastings said.

On this mission, for instance, crewmember Adriana Blachowicz, a science officer for this mission who works as a researcher at NASA’s Jet Propulsion Laboratory, will test an instrument that will be sent to the International Space Station.

The Sensoria missions additionally aim, as other analog missions have done, to push forward important research with a focus on sustainable solutions.

“These simulation missions are meant to be an opportunity,” Hastings said, “to solve some of the problems that we still have in understanding how to make space sustainable. And as anyone who works in the space sector knows, everything we do to solve for space solves for Earth.” In other words, by studying and developing solutions to common space problems, researchers can then apply those solutions to problems on Earth. Historically, a whole host of important technologies were developed with research directly from NASA’s Apollo program.

Sensoria will also work with educational institutions to support and uplift young girls. The project will communicate with undergraduate women who will be on site at the commercial space company Blue Origin. The series of Sensoria missions has also partnered with Sally Ride Science, an education nonprofit focused on supporting learning and women in science. The crewmembers of Sensoria will create content for the thousands of young women involved with Sally Ride Science.

The six researchers (alongside a number of remote crewmembers who will be supporting the mission) come from a variety of backgrounds, with many having participated in numerous analog missions previously. With this varied experience comes a host of interesting research that the crewmembers will pursue. Additionally, as the team mentioned, while each crewmember will focus on a number of projects, they will also work together and help each other with their studies.

Below are a few research highlights from the analog mission that the crewmembers described to Space.com:

Hastings will work to develop sustainable hydrogels, which can be used in everything from biomedical engineering to food development.
Crewmembers will work with different fermented foods created from recipes from colleagues around the world. The crew will both experiment with the foods themselves and study the microbial species that ferment those foods.

Sian Proctor, a geoscientist who will be serving as a science-communication outreach officer for this mission, will work on her Meals for Mars program, which focuses on food, space, and increasing both creativity and sustainability with food on and off Earth.
Blachowicz will test technology that is set to travel to the space station.

Makiah Eustice, an aerospace engineer and a habitat operations officer on this mission, will investigate improved ways of communication for extravehicular activities (EVAs). She will draw inspiration from existing means of communication, like American Sign Language and communications used in scuba diving and skydiving.

Bonilla will work on an extension of her master’s thesis that focuses on critical self-reflection in a space, or space analog, environment.
She will also work on an illustration project, incorporating art into the mission. Bonilla will investigate how the environment changes her art and how making art changes her experience in the simulation.

Proctor will also help to coordinate EVAs with the crew, working as a geoscientist to communicate to nongeologists how to sample from and analyze different terrain.
Maraia Hoffman, the crew engineering officer and training manager for this mission, will study crew dynamics in the habitat to inform future design parameters.

An additional note: The crew will participate in a daily dance party to keep morale high and maintain their connection to their lives on Earth. An important part of Sensoria, Hastings said, is to analyze how space exploration and culture function together and how astronauts can maintain a relationship with their lives and homes on Earth.