Why is the Geodesic Dome Strong | Pacific Domes
Skip to content

The American Institute of Architects calls the geodesic dome “the strongest, lightest and most efficient means of enclosing space known to man.” Geodesic Domes are composed of inter-connected triangles that give them unparalleled strength.

Buckminster Fuller, father of the modern geodesic dome, demonstrated the difference in strength between a rectangle and a triangle by applying pressure to both structures. The triangle proved to be twice as strong and remained rigid while the unstable rectangle collapsed.

At Pacific Domes, USA, we’re often asked the question, “Why is the geodesic dome called the strongest structure known to man?” We’ve been manufacturing portable, prefab geodesic domes since 1980, so you’ve come to the right place to get a precise answer to that question.

Basic Principles Behind the Geodesic Dome
As per the Buckminster Fuller Institute, in addition to demonstrating the strength of the triangle, ‘Bucky’ Fuller also discovered that a sphere created from triangles had unparalleled strength. This led to the “doing more with less” principle and to the geodesic dome.

Fuller brought awareness to the concept that when the dome’s diameter is doubled it will quadruple its square footage and produce eight times its volume. A dome encloses the largest volume of interior space with the least amount of surface area, thus saving on materials and cost.

Additionally, a dome’s structure is one of the most efficient interior spaces because air and energy circulate without obstruction. This enables natural heating and cooling.

Dome studies, comparing same-size traditional homes, have shown a 30% energy savings. Geodesic dome shelters have been built all around the world in various climates, and have proven to be the most efficient human shelter one can find. 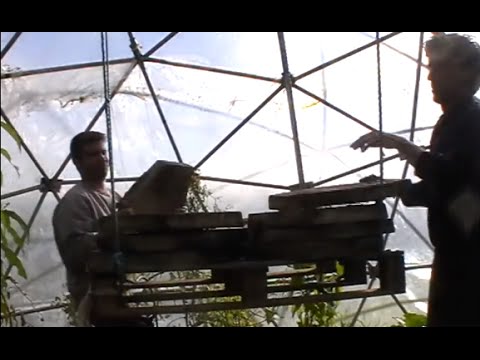