Pacific Domes of Oregon, building Geodesic Domes in Southern Oregon USA for over 36 years, received this award of excellence from the IFAI!

We are the industry leaders in the production of Geodesic Event Dome Structures for events of all kinds. We Specialize in Corporate Events Marketing, Trade Show Booth Displays, and Festival Tents for Rent

At Pacific Domes we received a letter dated October 9th, 2007 congratulating our company on being a “2007 International Achievement Awards competition winner!” We received an “Award of Excellence” for a retail project we installed in Plainsfield, Indiana – “Premier Properties, Metropolis Mall.” 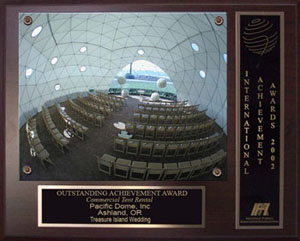 The 2007 “Award of Excellence” winner in the tent manufacturing category is a series of three vinyl domes, measuring 60 feet, 44 feet and 36 feet, designed for Metropolis Mall in Plainview, Ind., and created by Pacific Domes, Ashland, Oregon.

Similarly Pacific Domes won an Award of Excellence in 2002 for the Treasure Island wedding.