The creek painted on this dome is next to it, and the wildlife featured is a daily occurrence.

Traveling down a dusty road, bordered by golden fields and rolling hills of oaks and dark green conifers, eventually leads you to a remote haven known as Trillium. Nestled along Birch Creek and the Little Applegate River in the Siskiyou Mountains of Southern Oregon, Trillium is an off-grid wilderness community and retreat center. The residents who live in the small Commune, as well as organizations and visitors, have the opportunity to experience pristine nature, develop unique skills and share knowledge in this beautiful setting.

Pacific Domes’ client, Michael Brightwood, has lived there for the past 40 years, and has been a part of this multi-faceted community, education and birthing center. Michael’s willingness to share the details of how his family set up their dome home offers a unique glimpse into the reality of living off-grid in a dome.

Michael and his partner Shawneea divide their time between Mexico and Trillium, where they live off-grid in their 20-foot dome. Thirty-seven years ago, Michael had a 16-foot dome made by Pacific Domes (known then as Unicorn Domes) that he used for a school on the commune. Over the decades, the Trillium community has welcomed a number of domes owned by various families, in various sizes. Today, Michael and Shawneea are happy to share all the hand crafting and work they have invested into their dome home.

Michael says he “feels more comfortable in a dome than a yurt,” and considers his dome lifestyle his personal contribution to Buckminster Fuller’s work. “I like the way they feel, the tall space in the middle, when I come here I get happy… we look forward to coming here, it feels like a cabin,” he says.

Built four years ago, Shawneea and Michael’s off-grid dome home is situated in a green clearing surrounded by mature fruit trees, oaks, and a seasonal creek. Zoning laws vary widely and in Michael’s county, a dome is considered a temporary structure. “The whole dome was built with screws. Underneath is on post and beam.” The exterior is coated in green and beige Thermo-Shield paint, and the front door is adjacent to an open deck with a translucent roof to let-in the light. An outdoor bathroom is also situated on the deck.

The 20-foot dome has an open floor plan with a kitchen, living room and dining area. The wood dividing wall creates a separate space for a bedroom, storage room and sleeping loft. Michael custom-built everything in the dome, allowing him to make maximum use of the spherical shape. For a custom fit, he built the counters in the kitchen to follow the contours of the dome. Even the four-seat dining table has been customized.

A two-burner propane stove is used for cooking, and Shawneea has made a turkey and baked potatoes on the wood burning stove. An insulated wooden ice box placed outside the front door serves as their fridge. They fill it with ice from their neighbors. The exterior solar panels power all appliances and lights. There is also an independent solar fan for ventilation in the kitchen, an add-on from Pacific Domes.

To utilize the vertical space of the dome, they built a bedroom loft. Michael is proud of his creative design and installation of the ladder leading to the loft. By using hinges for a window, the ladder can be lifted up and out. While rolling on two wheels, it can easily move to fit into two grooves (which are cupboard handles from the hardware store) in the floor that secure it into place. Being able to securely store the ladder against the wall when not in use frees up space in the dome.

Below the loft is a bedroom and a storage room with shelves, both customized to the contour of the 20-foot dome. Using a metal U hook, Michael was able to secure the wood structure of the wall and loft to the dome frame, that effectively stabilized the whole structure.

The dome is heated by a wood burning stove, which also acts as a cooking stove. To protect the fabric dome cover from heat, there is Hardy back beneath the stove, as well as behind the stove mounted to the dome frame. Hardy back is fire proof – it’s basically cement sheet, but you can cut it with a regular saw, and therefore it is far easier than installing a tiled hearth. The stove pipe exits the dome through a stove cap with flashing, also available as an add-on from Pacific Domes.

The floor of the dome is built on a plywood platform with a crawl space beneath. Michael screened off the crawl space with builders hardware cloth (appears to be 1 cm gauged heavy duty screening). The screening allows for airflow and keeps-out vermin, and the ground has been covered with plastic sheet. The interior floor has been covered in vinyl or laminate.

As it rains a lot during the winter, last year they built a covered deck to house an odorless composting toilet from Sun-Mar (in operation for 40 years; the cost of a composting toilet is around $1,500). Composting material of peat moss is added regularly, and occasionally they add enzymes and hand crank the system for ventilation. After six months, you can extract soil that is clean enough to put on fruit trees and ornamental plants. Michael has a place reserved where he will build a shower using a natural gas on-demand hot water heater.

Michael says they “regrettably, did not have the foresight to purchase the thermo-insulated liner from Pacific Domes.” Last year they were living in the dome December through February, and they could stay warm around the stove, but wanted to be more comfortable throughout. To regulate the dome temperature against the cold or heat of the seasons they began a DIY install of a reflective bubble insulation. Shawneea tried different methods of attaching the insulation, including a first attempt using duct tape and clips. She found that pieces of thin wire poking through the insulation and attaching to the frame worked best.  It’s a work in progress, as each triangle has to be cut to fit by hand, and there are five different sizes of triangles. Although the dome is not yet fully insulated, they can feel the difference already. In the future, she will add tapestries to cover the reflective foil.

One upgrade to the thermo-regulation of the dome comes from the layers of Thermo-Shield paint applied to the outside of the dome. Thermo-Shield paint was developed in conjunction with scientists from the space and ceramics industries, and has been on the market since 1984, with remarkable success in energy saving as a non-hazardous, protective paint. Painting with thermo-shield adds 10-15 years to the life of the cover, according to Pacific Domes founder Asha Deliverance. To add more of their personal style, Shawneea intends to paint murals over the top coat. 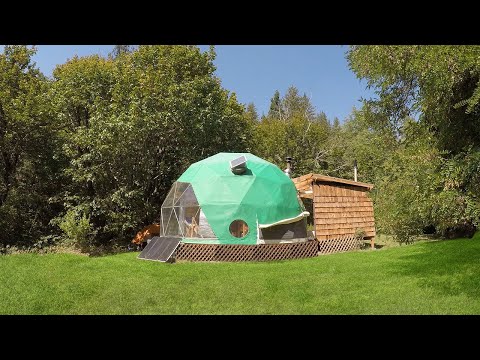 Another of Michael’s pro-tips is using a metal angled glazing knife to pop the round windows in and out of their frames to vent the dome. They also have two base roll-ups, which are large rectangular windows at the base of the dome, with zipper flaps which can be rolled up to allow airflow during the heat of the day.

In choosing to live off-grid, simply and sustainably, Michael and Shawneea have said yes to alternative living in a dome, and have benefited from being close to nature and the rhythms of the seasons. For them it’s a way to enjoy some peace and quiet and make the most of their semi-retirement.

In 2019 Shawneea took on a big project of painting a mural on the dome, she mixed the thermo-shield paint with pigment to create these amazing scenes. We had no idea she was such a great artist. Here are photos of her artistry painted onto their dome: