“For the first time in history, it is now possible to take care of everybody at a higher standard of living than any have ever known. Only ten years ago the ‘more with less’ technology reached the point where this could be done. All of humanity now has the option to become enduringly successful.” ― R. Buckminster Fuller (circa 1980)

R. Buckminster Fuller envisioned a Utopian future for humanity, blazing the trail for others to follow through his life’s work as a prolific researcher, inventor, writer and teacher. The driving force behind Fuller’s contributions was the principle that the world must work for 100% of humanity.

Born in Milton, Massachusetts, on July 12, 1895, Richard Buckminster Fuller hailed from a family lineage that produced independent thinkers, driven toward activism and public service. During his early childhood education, Bucky (as he was affectionately called) developed a love of Nature and an appreciation of the Natural Laws that pervade every living construct.

Join Pacific Domes in celebrating R. Buckminster Fuller’s Legacy!
One of Bucky’s most well-known and significant inventions is the geodesic dome, designed from nature’s own geometry. Space is full of buckyballs (also known as Fullerenes), icosahedral molecules with 60 linked carbon atoms.

We live in a holographic universe, and buckyballs are found at every scale from nanoparticles to galactic measure. This same geometry mirrors itself throughout the interwoven continuum of the cosmos.

The Bucky Fuller commemorative postage stamp was released in 2004 in honor of the 50th anniversary of Fuller’s patent for the geodesic dome. An inventor, architect, engineer and philosopher, R. Buckminster Fuller has been called one of America’s most original thinkers. 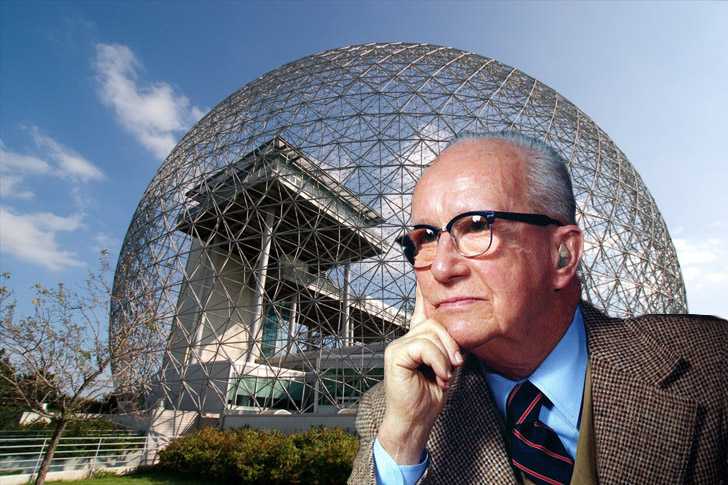 Fuller blazed the trail for others to follow… “We are called to be architects of the future” ― R. Buckminster Fuller

Bucky Fuller― a Humanitarian Trail-Blazer
Many big thinkers are calling attention to the need-of-the-hour as humanity approaches ‘near-extinction levels.’ However, there is hope for a bright tomorrow as Millennials, guardians of our future, pick up the torch. Creating new norms and divesting from broken paradigms that no longer serve the greater good, Millennials are coming up with solutions, innovative ideas and technologies, forging a new era of prosperity – so, let’s hear it for the Millennials!  To quote Bucky Fuller: 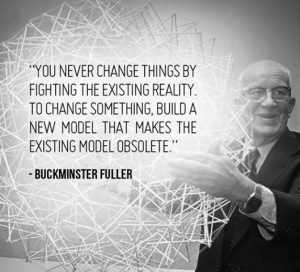 “We should do away with the absolutely specious notion that everybody has to earn a living. It is a fact today that one in ten thousand of us can make a technological breakthrough capable of supporting all the rest. The youth of today are absolutely right in recognizing this nonsense of earning a living. We keep inventing jobs because of this false idea that everybody has to be employed at some kind of drudgery because, according to Malthusian Darwinian theory he must justify his right to exist. So, we have inspectors of inspectors and people making instruments for inspectors to inspect inspectors. The true business of people should be to go back to school and think about whatever it was they were thinking about before somebody came along and told they had to earn a living.” ― R. Buckminster Fuller 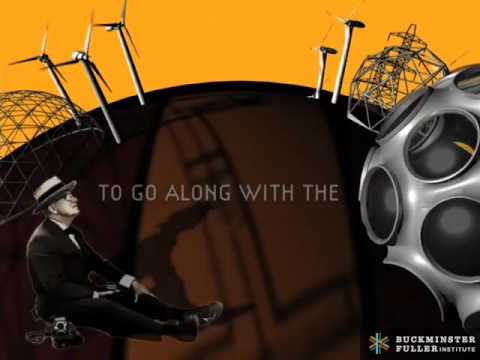 Each year, the Buckminster Fuller Institute (BFI), invites innovators to take the “Fuller Design Revolution Challenge.”  2017 marked the 10th anniversary of this unique prize with a record number of entries.

Each year, people from all over the world, working in many respected fields, are encouraged to enter the Challenge.  Regarded as design’s highest social-responsible award, the Fuller Design Challenge is about advancing a whole systems approach to “addressing the many crises’ facing humanity and the fundamental systems that support life on Earth.”

Participants are given the opportunity to win the $100,000 grand prize. The annual entry deadline is typically at the end of March. You can learn more about how you can participate here: https://www.bfi.org/challenge. 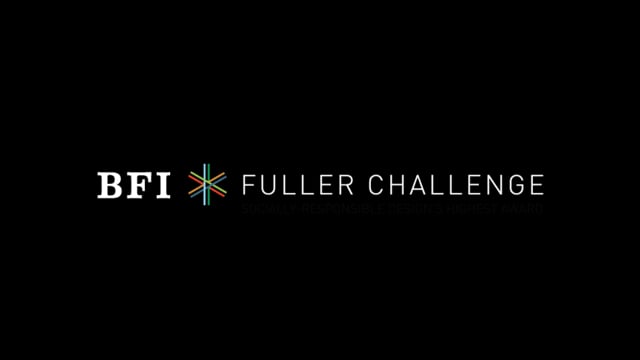 Pacific Domes is the original dome company to pioneer Buckminster Fuller’s geodesic design principles. For over 35 years as president of Pacific Domes, Inc., Asha Deliverance has had had the great pleasure of building an American manufacturing company that has become the industry standard in geodesic manufacturing and installation.

Pacific Domes is a futuristic company that is working toward the creation of global sustainable communities. As the founder of Pacific Domes, Deliverance has the unique honor of sharing her birthday (1 day apart) with her distinguished predecessor, R. Buckminster Fuller.

Enjoy a “Fuller” View of the Universe Inside a Planetarium Dome.
Following in Fuller’s footsteps, Pacific Domes has created a Planetarium Dome using his cosmic architectural model. What better place to navigate the heavens than from inside the very structure from which it is designed?

Out of the strength and portability of Bucky’s geodesic blueprint, Pacific Domes designed one of the most imposing free-standing Planetarium Domes on Earth. The dome houses a 360° projection screen onto which spectacular scenes of the heavens realistically simulate the motions of stars, planets and celestial objects.

Planetarium Dome Uses
Portable Planetarium Domes are being used for entertainment and education about astronomy, the night sky and celestial navigation training. This immersive environment enables interactive exploration of both Earth and space science.

Pacific Domes’ free-standing mobile Planetarium Domes are recommended by Planetarium leaders. Projection dome theaters with a patented projection liner can be implemented for one-tenth the price of other planetarium systems.

For additional inspiration on how you can adopt a “Fuller” cosmic and worldview inside a Planetarium Dome, be sure to visit Pacific Domes’ Gallery.