Geodesic Dome Homes for Sale or Rent by Pacific Domes

“There are continuous reports of the geodesic dome being the only building left standing after a hurricane.” — Pacific Domes Inc.

People often bring up the question, “which is a better investment, domes or yurts? Of course, we love talking about the many benefits of our dome homes.

Our goal is to provide you with relevant information, such as features and functionality, that will allow you to form your own conclusions. With all due respect to our nomadic ancestors, after weighing in on some unique comparisons, we believe you’ll agree that our domes are by far, the most efficient human shelter around. 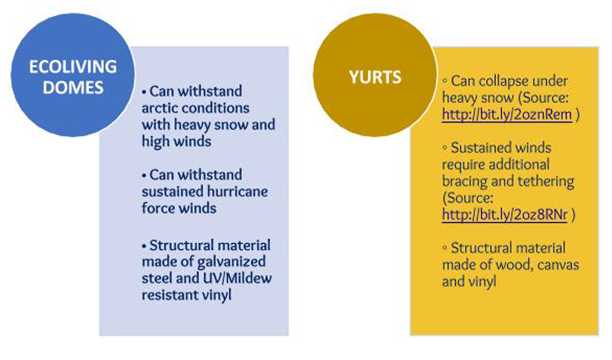 Domes have gained worldwide popularity in non-traditional housing markets, such as eco-tourism, glamping, and even disaster relief efforts. Due to their portability, economical building costs and sustainability, domes solve many unaddressed ecologic and economic challenges in traditional building methods and materials.

Domes are suited to all types of terrains. They are fully deployable and can be erected in hours with simple hand ratcheting tools. Because they are considered temporary shelters – in that they can be taken down when no longer needed – this often simplifies or bypasses building codes.

The spacious dome interior offers limitless possibilities for creativity. Its circular design encloses the greatest volume of interior space with the least amount of surface area.

Concepts Behind the Dome According to the Buckminster Fuller Institute
Domes came into vogue in the ‘60s with Buckminster Fuller, father of the modern geodesic dome. Fuller received many awards throughout his life-long career and was awarded the American Institute of Architects’ Gold Medal for inventing the strongest structure known to man.

Fuller demonstrated the difference in strength between a rectangle and a triangle by applying pressure to both structures. The triangle proved to be twice as strong and remained rigid while the unstable rectangle collapsed.

He also discovered that a sphere created from triangles, had unparalleled strength. This led to the “doing more with less” principle and the geodesic dome.

Fuller reintroduced the idea that when the dome’s diameter is doubled it will quadruple its square footage and produce eight times its volume, a dramatic increase in space over a yurt. A dome encloses the largest volume of interior space with the least amount of surface area, thus saving on materials and cost.

A dome’s structure is one of the most efficient interior spaces because air and energy circulate without obstruction. This enables natural heating and cooling.

Domes Are Energy Efficient
Geodesic dome shelters have been built all around the world in various climates, proving to be the most efficient human shelter one can find. Specifically, domes are more energy efficient than yurts for the following reasons:

Browsing Pacific Domes gallery of ecoliving domes for purchase or rent is your first step towards exploring the benefits and versatility of geo-engineered domes as the strongest, portable structure known to man.