What futuristic images does the mention of Dome Cities conjure up for you? If you picture apocalyptic scenarios that represent humanity’s last stand as a species that’s either dead or dying, forced to dwell inside glass-encapsulated cities, protected from the inhospitable chaos of the world outside, then you probably have company.

Wikipedia defines a domed city as “a hypothetical structure that encloses a large urban area under a single roof. In most imageries, the dome is airtight and pressurized, creating a habitat that can be controlled.” According to GameSpot’s Comic Vine definition, “A domed city is a city that is protected and/or isolated from its external environment by a huge structure, generally a translucid dome.”

Futuristic Dome Cities: A Positive Timeline?
However, what people are calling ‘Dome Cities’ these days is only a baby step towards creating a space-age megalopolis (densely populated urban area or city). An illustration of this would be University of Arizona’s Biosphere 2, a complex of interconnected domes and glass pyramids nestled in the Arizona desert.

The Eden Project is another educational non-profit platform that connects us with the natural world and each other by exploring how we can work towards a better future. Here, nestled in a huge crater, stand massive monolithic Biomes, housing the largest rainforest in captivity, stunning plants, exhibitions and stories, which serve as a backdrop to striking contemporary gardens, summer concerts and exciting year-round family events.”

Pacific Domes U.S.A. manufactures Biosphere Domes that are engineering marvels designed to maintain whole sustainable systems for the future of Biosphere living. Through earth based science, Biosphere Domes are forging a new era in sustainable living by integrating the innate Intelligence found in Nature’s self-sustained ecosystems.

Dubai’s climate-controlled desert “Mall of the World”, that houses shops, hotels, apartments and entertainment under its 4.3 mile translucid domed complex, has fanned ongoing discussion as to the pros & cons of building futuristic dome cities. Nonetheless, pointing towards a hopeful future, the launching of a colossal space-age 15-meter geodesic event sphere by Pacific Domes, a U.S. geodesic dome manufacturer, in concert with projection companies Dubai 360 and Obscura Digital encompassed the world’s largest interactive virtual city tour ever.

“Walking into a projection sphere above, beneath, and all around you is like floating inside the earth!” —   Obscura Digital

Domed Cities for Space Exploration
Domed cities or clusters of domed cities are also being investigated by some scientists as suitable habitats for humans living in other weather-conditioned environments, on Mars, the Moon and beyond. Theoretical physicist and professor Dr. Michio Kaku says, “It’s like an insurance plan for humanity that will help us sustain when earth will no longer be habitable.”

As we look around us at disappearing species, climate changes and earth changes, some of us are tempted to lend credence to this doomsday scenario. However, setting aside concerns about the future of humanity, NASA’s announcement in September of 2015 that water has been discovered on Mars jumpstarts future spaceflight plans with exciting prospects for Mission Mars Dome Colonies.

NASA and futuristic dome manufacturing company Pacific Domes teamed up in early 2013 to erect a 44 ft. geodome on the northern slope of Mauna Loa, Hawaii.  To test some of the possible challenges of living on Mars, NASA sponsored HI-SEAS (Hawaii Space Exploration Analogue & Simulation) Mission 1.  HI-SEAS has received additional funding from NASA to continue research and recently completed Mission 5 in the Mission Mars Dome. 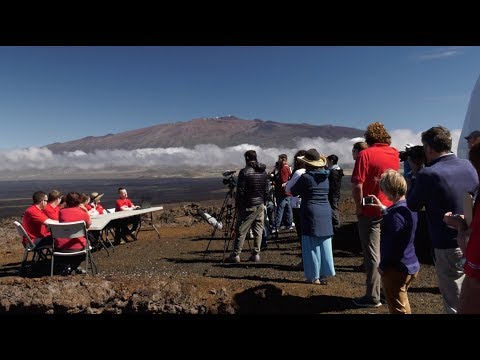 Pacific Domes’ geodomes have unparalleled strength and are ideal structures for extreme environments.  The geospheres use the ‘doing more with less’ principle, in that they enclose the largest volume of interior space with the least amount of surface area, thus saving on materials and cost.  When the sphere’s diameter is doubled, it quadruples its square footage and produces eight times the volume.

Are we ready for tomorrow to begin right now?  NASA recently astounded the world, again, with a documentary published in April of 2016 proclaiming that Alien Life Exists in Space.  SpaceX CEO Elon Musk announced plans to land a Dragon capsule on Mars as early as 2018.

SpaceX hopes to work with NASA on the long-term plan to transport large volumes of people and cargo to Mars in an affordable way.  The architectural open space design of the SpaceX Dragon line of rockets and space ships makes use of geodesic-engineering principles.

Just imagine… if we had sustainable dome cities, couldn’t we control the adverse effects of uncontrollable planetary changes, such as solar flares, pollution, wind, weather and other catastrophic and near extinction events? Wouldn’t large, compactly populated cities, like New York in the U.S. and Tokyo in Japan, greatly benefit from filtering out polluted, toxic environments and buffering against Nature’s extremes?

If you enjoyed this post, let us know what you think!